With mobile browsing on the rise, we set out to better support mobile devices in Orbeon Forms. We are particularly focused on tablets, as the larger real estate provided by those devices makes them more suitable than phone to fill out forms. And for now, we are doing most of our testing on iOS, since, as of this writing, Apple is dominating the tablet market, even though we wouldn't be surprised to see Apple's lead erode given Android overall success in the mobile space.

Over the last few months, we addressed a few smaller cosmetic issues, for instance to leverage iOS 5 native style momentum scrolling in text areas, or improving the look and usability of the selection control using the menu appearance. In the last few days, we implemented the support for the native iOS date and time widgets. 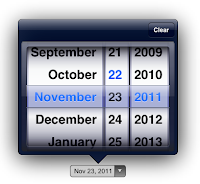 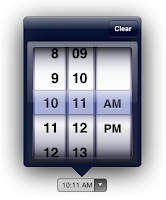 And this is just a beginning: we have more improvements targeted at mobile browsers in the pipeline.
Posted by Alessandro Vernet at 5:45 PM