Automatic schema generation for forms you create in Form Builder 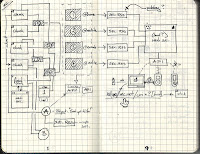 The structure of those XML documents is driven by the names you give to sections, repeats, and controls when you create your form in Form Builder, so you know what the XML will look like. But what if downstream, software is consuming those XML documents? A better way to communicate what the XML "looks like" to software is by using an XML schema. And this is why Orbeon Forms 4.0 PE introduced a new service which can automatically produce an XML schema describing the structure of the XML data collected by each form you built with Form Builder.