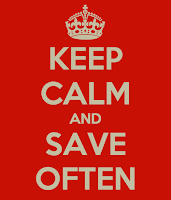 Glitches happen. While you're filing a form, your browser might crash, your computer be disconnected from the power or run out of power, your Internet connection might go down, or the server might have a technical issue. When such a glitch happens, you're likely to loose whatever work you've done since you last saved. Hence was born the Save early, Save often mantra. But why would you have to do what software can automatically do for you?

In Orbeon Forms 4.3, we introduced the autosave feature. When autosave is enabled, as the name implies, your work is automatically saved in the background as you interact with the form. Since we want to keep the distinction between data you explicitly saved and data that was autosaved, we refer to the latter as drafts. You can access drafts from the summary page, on which they are clearly marked as such. Also, if you go back to a form, and you have a draft for that form, you'll also be asked whether you'd like to continue your work from that draft.

In Orbeon Forms 4.3, autosave is available for MySQL and DB2, and needs to be enabled through properties. In the upcoming Orbeon Forms 4.4, this feature will be available and enabled by default for all relational databases supported by Orbeon Forms.
Posted by Alessandro Vernet at 11:45 AM