A while back, we explained how and why we greatly simplified the list of data types in Form Builder, and we wrote:


We have reflected this in Form Builder by putting the decimal type at the top and the double type at the bottom, and we might even remove it altogether in the future.

Lately, as we were working on improvements to the Number field, we gave a bit more thought to the "double" type (AKA "double-precision floating point") and have decided that it was finally time to remove it from the data type list as well! So here is the new list: 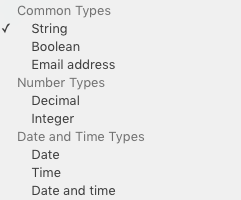 For compatibility reasons, the list still shows "Double-precision floating point" for existing controls with that data type, but not otherwise. So the "double" data type keeps working as it did in the past, but form authors are strongly discouraged from creating new controls with it.

If you are using the "double" data type, we recommend that you think about whether you really need it. In general you should use the "decimal" type instead. One thing is certain: don't use doubles to represent currency amounts!

This change will be available in Orbeon Forms 4.11.
Posted by Erik Bruchez at 9:17 AM