Until Orbeon Forms 2016.3, there was only one way of controlling attachment constraints: via a single, global property. So you could say that that the maximum file attachment upload size was 100 MB, and that would apply to all attachments in all forms.

The upcoming Orbeon Forms 2017.1 provides a lot more flexibility, allowing you to set:

For each one of those, you can:
Per-control settings allow you to specify for example that a given attachment must be a text file, and that another attachment on the same form has a maximum attachment size of 2 MB (less than the default). Such settings are specified in the "Control Settings" dialog: 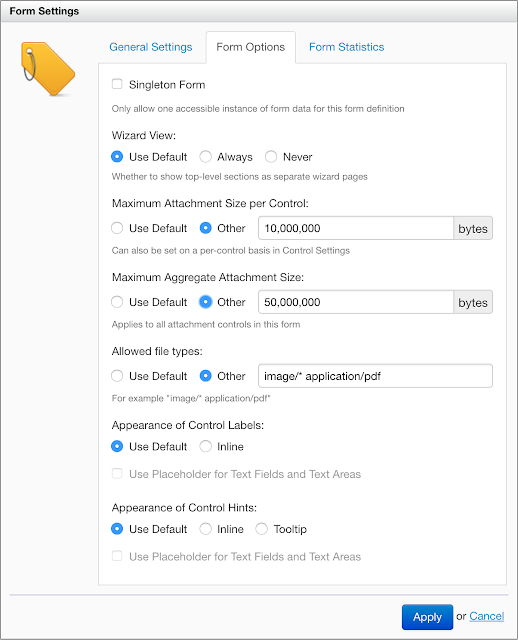 Finally, the maximum aggregate attachment size allows you to specify, for example, that for a given form being filled by a user at most 50 MB of attachments can be provided, no matter how many attachment controls are in the form. This upper limit on the attachments provided helps prevent an undesired explosion of uploaded data, especially if you use repeated grids or sections that contain attachments.

We hope you will like these new features, which will be available in the upcoming Orbeon Forms 2017.1!
Posted by Erik Bruchez at 12:09 PM