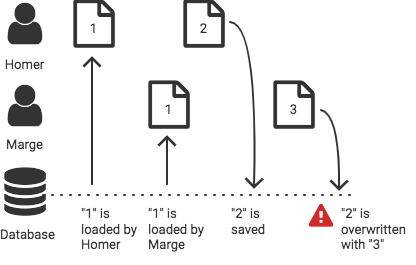 When two users have permission to edit the same instance of form data (also known as a document), there is a chance that they might inadvertently overwrite and lose changes done by another user.

This situation is illustrated by the diagram on the right. Say a first user, Homer, loads a document that contains "1" as the value of a field. Then say a second user, Marge, loads the same document. At that point, both Homer and Marge have the same document with the value "1" loaded in their browser. Now Homer can change the value from "1" to "2" and save. On her side, Marge can change the value from "1" to "3" and save. As result, Marge will overwrite the change done by Homer, and this without Homer or Marge knowing about it.

Orbeon Forms, starting with version 2017.2, provides a solution to this problem:

Of course, the lease system is optionally enabled, and all the durations mentioned earlier are defaults, and you can change them if needed. With the new lease mechanism in place, you can easily avoid situations when multiple users edit the same document, making your form solution using Orbeon Forms safer and more reliable. For more on this, see the documentation on the lease feature.
Posted by Alessandro Vernet at 11:26 AM